Only three weeks after reopening its borders to international travelers, the Bahamas made the stunning decision to restricts tourism. As of last week, only visitors from Canada, the UK, and the EU are now allowed entry into the country. The U.S. was notably left off the list of approved travelers due to the rising case numbers in the country.

Prime Minister Minnis stated this decision was made in an effort to protect the country as the situation had deteriorated “at an exponential rate” since the border was reopened. Since reopening, the country saw a spike in cases. As of June 30th, there were only 104 confirmed cases in the country, but that number has since increased.

Despite restricting the border, case numbers continue to rise. The Bahamas reported 16 new cases on Monday, including the first case in Exuma. This comes after 10 new cases were confirmed on Saturday.

Exuma’s first case was recorded in a 27-year-old woman whose travel history was not disclosed. This province managed to remain COVID-19 free during the first wave. There have since been 2 more cases recorded in Exuma as of yesterday bringing the total number up to 3. The two additional cases were a man and a woman, both 42-years-old.

There have now been 382 cases of COVID-19 recorded to date in the country. This means there have been 278 new cases since the Bahamas opened up their borders to international visitors again. 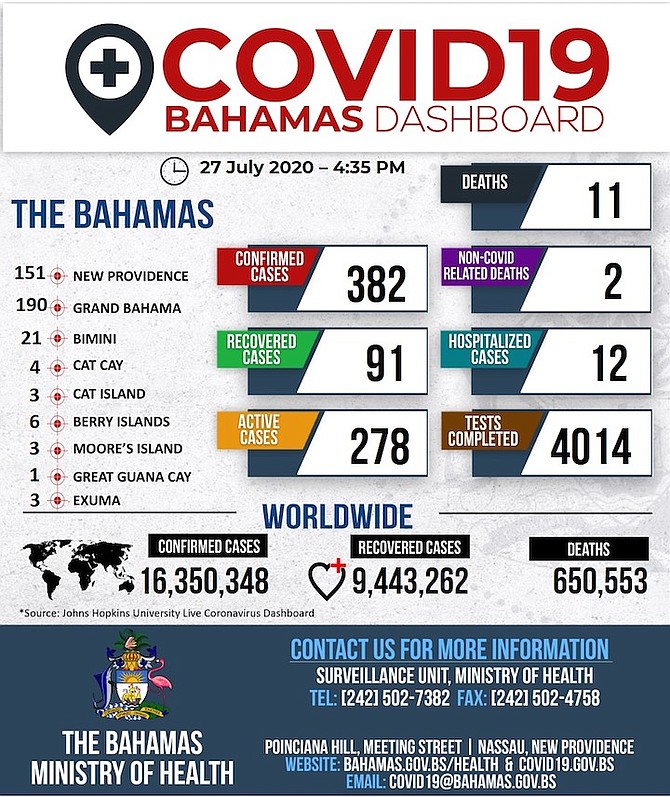 Grand Bahamas has emerged as the epicenter for COVID-19 cases in the Bahamas. The head of the Grand Bahama’s COVID-19 task force, Dr. Frank Bartlett said most resides with the coronavirus in Grand Bahamas are between 40-49, however, the first confirmed case in the new wave was a 27-year-old man who had known contact with two people who had recently traveled to Fort Lauderdale.

Dr. Bartlett said the most common symptoms in recent positive patients are cough and other cold and flu-like ailments along with fever and respiratory issues. He said some people have also had muscle aches and headaches. A “small minority” have complained about a loss of taste and smell, he said.

As of now, the country isn’t conducting mass testing. However, locals and tourists are encouraged to take caution and follow measures to reduce the spread.

Everyone should wear a face mask when leaving home, wash hands often, cover mouth and nose when coughing or sneezing, stay home if feeling ill, and clean and disinfect frequently touched surfaces and objects.

Please do your part in keeping the community of Exuma safe.