That’s the only word to describe what the Fyre Festival has turned into.

When we wrote about our initial skepticism about this luxurious music festival we never thought it would descend into this. There were inconsistencies, there were questions, but there was also hope.

For a while it looked like Ja Rule and his team would actually pull off Fyre Festival. They updated their sites, removing some of their wording to be more honest. The words still spun and fluffed reality but it was closer to the truth. Artist began posting about the event, hyping it up even more.

There were still problems though. Although the official site added a number to talk to someone in person people who tried to call complained they could rarely get through. Others stated that they still hadn’t received any flight information. Then there were the wristbands. The festival told goers it was going to be a cashless event and that they should upload money on the wristbands ahead of time. The kicker, there was a deadline to do this. It later came out that they needed this money to continue to fund the event.

Then came yesterday, Thursday, April 27th. It was the day many festival goers were being flown out. Some people left as early as 5 am. It was the start of the downfall.

Flights were delayed due to a power outage at the Great Exuma Airport. Power outages are frequent on the island. The grid can barely support the few thousands that live there so how could it be expected to support thousands more plus the equipment required to run a festival.

When people did arrive they were greeted with blatant disorganization. People were taken to a beach away from the festival grounds. The organizers had paid Instagram model influencers pouring rose and tequila down their throats and sent them off to see the famous swimming pigs. These distractions tactics worked for most of the day. Until it started to become dark and there was still no word of their living accommodations. They were also separated from their luggage.

Meanwhile, people were still trying to fly in. That was until Fyre Festival canceled all remaining flights to Exuma. The first flames started to spark. Rumors flew that these planes were needed to evacuate those that were already there. People were now stranded in Miami, some of these people from other countries, with nowhere to stay for the night. And without the event officially canceled they clung to hope.

It was about this time that Blink 182- a major headliner for the event, announced that they were pulling out.

Pictures online began surfacing of the “luxury tents”. Speculation that they were just disaster relief tents turned out to be true, but they weren’t relieving any disaster if anything they were causing one. Tents were torn open, blowing in the wind. Mattresses lay exposed in the sand next to a road.

Finally those on the island were shown to their accommodations. Tents were soaked. People were grabbing whatever they wanted. There were no pillows. The tents couldn’t be closed. The luxury catered food people were promised turned out to be bread with rubbery cheese and a handful of salad. When luggage was returned it was tossed into darkness with no system.

The dinner that @fyrefestival promised us was catered by Steven Starr is literally bread, cheese, and salad with dressing. #fyrefestival pic.twitter.com/I8d0UlSNbd

This is how Fyre Festival does luggage. Just have your attendees unload a shipping container in the dark. #fyrefest #fyrefestival . . . #bahamas #fyre #itslit #notreally #vacation #hostel #influencer

Things started to go from bad to worse. People began getting robbed and mugged. Alcohol was being stolen. Security began rounding people up without explanation. People weren’t allowed back in the tents where their items were. Fights, violence, and pandemonium took over.

It was at this point that twitter started blowing up. #fyrefestival became trending as people began tuning in watching the drama unfold. Jokes ensued as expected. Was Fyre Festival more like Lord of the Flies or Hunger Games? Would Jenner show up with a Pepsi to save it? Hastages like “#dumpsterfyre #Fyrefraud #fyrefail” and others accompanied the tweets.

Don't worry #fyrefestival, Kendall is bringing Pepsi in the morning

At random it seemed people were rounded up and catered to the airport. While these people might have thought they were the lucky ones they must have quickly realized they weren’t. They sat on a plane for hours before being forced to deboard. They were then locked in a hot airport with no food or water. Reports of people fainting and vomiting started filtering in. Finally the first flight left this morning and people have just landed in Miami.

We have been locked indoors with no air NO FOOD and NO water #fyrefestival #fyrefest fyrefraud pic.twitter.com/wg5pZmSvnx

Influencers were asked not to report on the event and to delete pictures from it. The Bahamaian governement released a statement.

Our official statement on @fyrefestival

One question rang like a bell through the noise: Where is Ja Rule? The hype man of the festival, who had spent the days leading up to it tweeting and posting non-stop about it was now silent.

People still stuck on the ground in Exuma are in the lurch. The first aid tent is empty, food is scarses, and people have no answers. 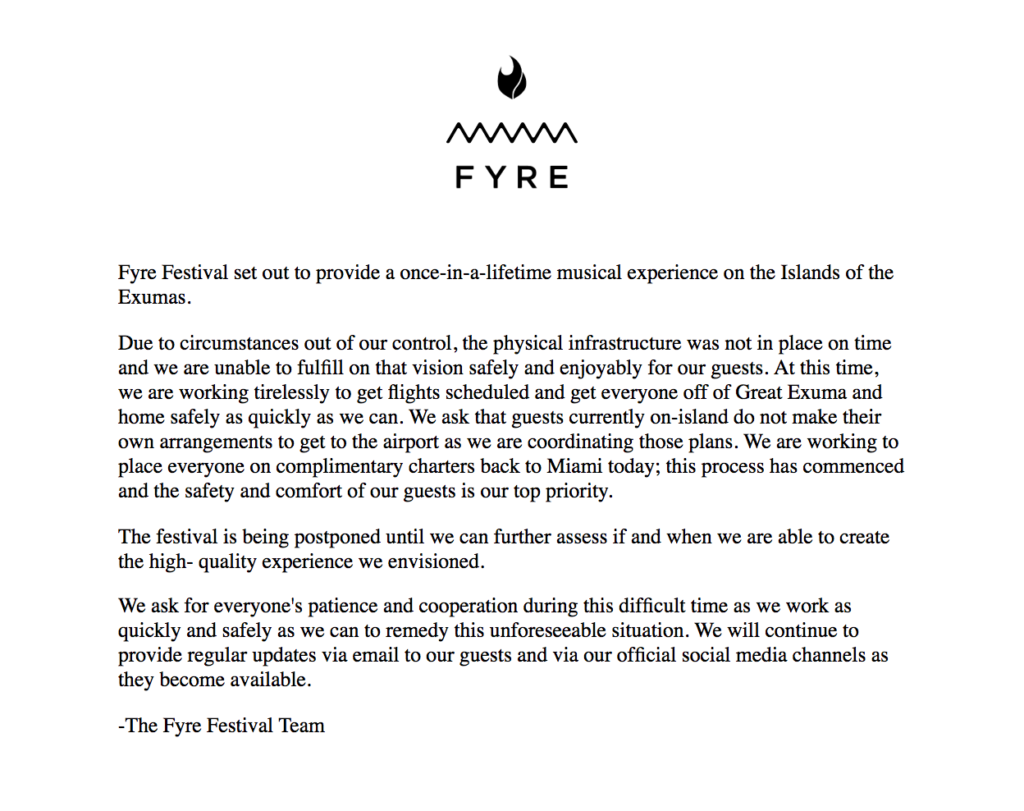 Fyre Festival has officially gone up in flames.

Now it only remains to be seen what will happen when the flames finally go out and the smoke clears.