The nurse sharks on Compass Cay are just one of the many wildlife attractions Exuma has to offer. The nurse sharks in the area are more docile than most and used to human interaction. But as one Instagram model on vacation found out, they’re still wild and dangerous.

Katarina Zarutskie is a 19-year old college student and Instagram model, who has over 13,000 followers (now 28.6 thousand) that she keeps updated with travel and lifestyle tips.

Last month, Zarutskie traveled to Exuma with her boyfriend’s family. After a walk on the beach, she stumbled upon the spot on Compass Cay where the nurse sharks are fed and visitors are allowed to swim with them. There were multiple other people swimming with the sharks, and Zarutskie was eager to join and snap the perfect picture.

Zarutskie said “nurse sharks are calm creatures” and that she had seen Instagram pictures of people swimming next to them many times. After entering the water, she laid her head back. That’s when one of the nurse sharks swam towards her, biting down on her wrist, and pulling her under.

She remained calm though, pulling her arm out, and holding it above the water so the blood wouldn’t attract the other sharks. Zarutskie safely got out of the water and was lucky enough to escape with just a bite. In the month since she has been recovering and taking multiple antibiotics. 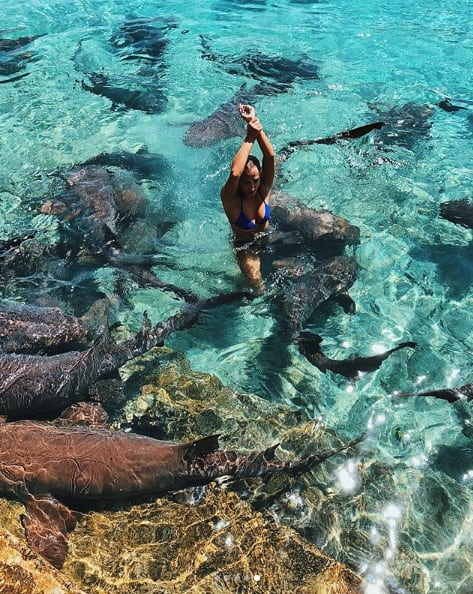 After posting the incident to her Instagram account, Zarutskie was attacked for seemingly blaming the sharks. However, she insisted that she loves sharks still and that the shark didn’t do anything wrong. “They are wild animals and it’s an uncontrollable situation”, adding that the experience was a “big learning lesson.” She cautioned others thinking about swimming with the sharks to understand the risks. 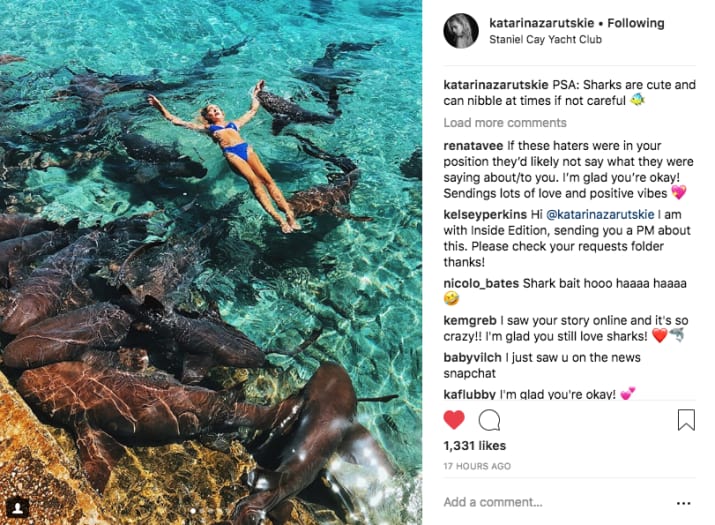 Swimming with the nurse sharks on Compass Cay is one of the most popular tourist attractions. Attacks and bites are rare, but they are known to happen. The owner of Compass Cay that oversees the shark swimming even has signs warning visitors of the potential risks.

The pose Zarutskie was attempting to do, floating flat on her back with her arms outstretching, might look pretty in pictures but it isn’t ideal when swimming with such dangerous creatures. Outstretched limbs can easily be mistaken for food.

We still recommend swimming with nurse sharks to visitors, but with caution. Keep limbs close to the body, eyes always on the sharks, and don’t attempt certain poses even if they look good for Instagram. Zarutskie was lucky that she remained calm in the situation. If she had panicked the situation could have been worse. Always understand all of the risks before interacting with any wild animals.