Hurricane Irma has been barreling her way through the ocean and is now set to hit the Caribbean and Florida. The storm has just been upgraded to a category 5.

Irma is expected to hit the northeastern Caribbean islands and Puerto Rico by Wednesday. It could possibly make its way onto the mainland too, targeting Florida.

The storm began building speed early this morning, reaching winds of 175 mph. The threshold for a category 5 is only 157 mph, meaning this storm has topped the charts.

The current trajectory of the storm has it near or over Antigua and Barbuda, St.Kitts and Nevis, and Anguilla by late Tuesday or early Wednesday. By tomorrow afternoon the storm will reach the Virgin Islands and Puerto Rico. 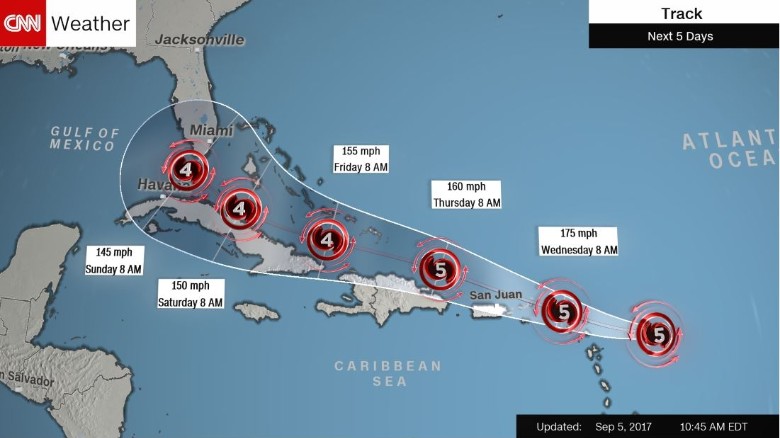 Water surges could be expected to get as high of 7-11 feet. It’s recommended residents of Exuma stay inside and away from the water. Flooding and the wind are also risks to the islands.

Irma is a “Cape Verde” hurricane, meaning it formed in the far eastern Atlantic, near Cape Verde Islands (known now as Cabo Verde Islands). It has since trekked across the Atlantic. This is worrisome, as Cape Verde hurricanes frequently become some of the largest and most intense storms.

Be sure to stock up on supplies and get to a safe location! See our list of Exuma Hurricane Shelters.